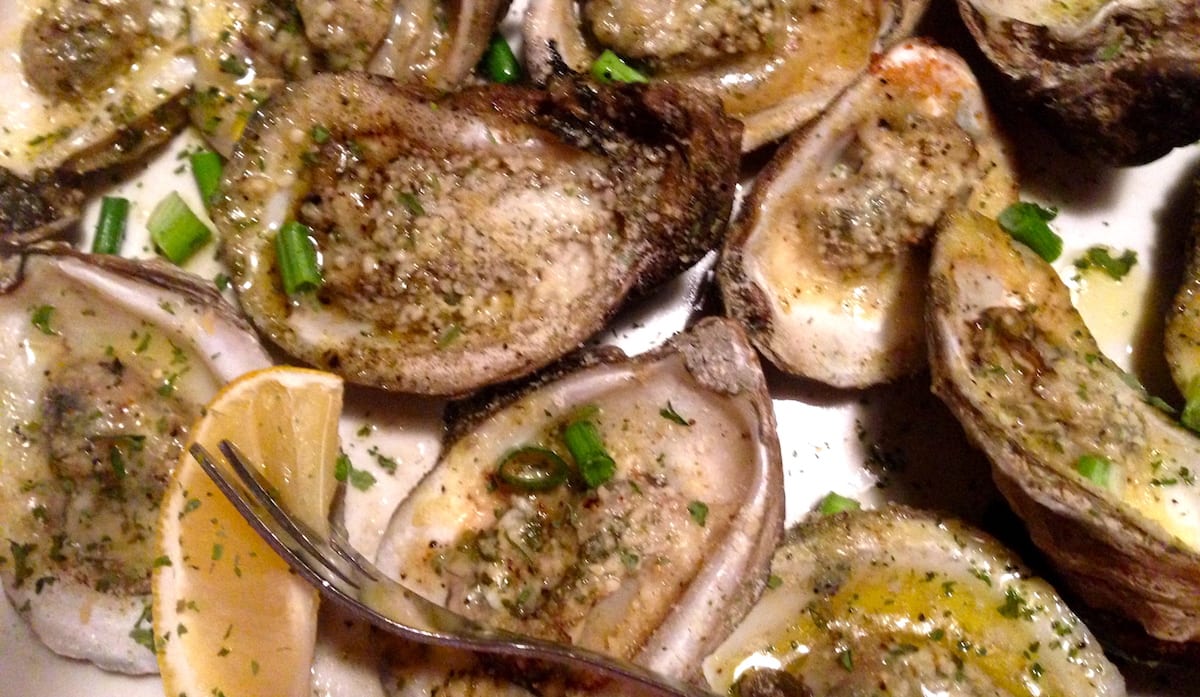 Friday night we decided to give a new place on the East Side, Half Baked Oyster Bar, a try.  The new seafood restaurant and oyster bar opened several months ago and we finally made it in to see what they had to offer.

We started with a dozen oysters, half of them fried and the other half “Way Out There” (baked with garlic herb butter topped with shrimp, crabmeat and shredded smoked gouda cheese.

The fried oysters were perfectly seasoned and lightly tossed in flour before a quick dip into the frying oil.  They weren’t greasy or heavily breaded, which is just the way we like them.

The Way Out There oysters at Half Baked Oyster Bar were a nice version of baked oysters I had not had before.  The taste combination of the smoky cheese with the seafood worked well and we really enjoyed them.  The combination of the two was just $14 and a really nice starter for our meal.

For our entrees, we chose the Captain’s Catch and the grilled scallop dinner.  The Captain’s Catch is Half Baked’s version of a seafood platter.  It comes fried but you can also opt for it to be grilled or blackened for an extra $1.  The catch consisted of a few massive shrimp and oysters, some scallops and a couple of good-sized pieces of fish, which I was told was Alaskan white fish.  It was served in a basket on top of a large helping of fresh-cut fries and a couple of hushpuppies.

The scallops were grilled with onions and peppers.  I am not a fan of onions so I would have chosen to omit those had I known but they were easy to work around.  The scallops were tasty.  This dish also came with some of those fresh-cut fries and hushpuppies.  If you are a regular reader you know that I am a huge fan of fresh-cut fries and when a restaurant has them, they are automatically given a couple of extra points!  The hushpuppies were just the right amount of sweet and savory without overdoing it with the onion flavoring and thankfully it seemed that they use onion powder because I didn’t have any pesky onions to work around.

Both entrees were under $20 each and after the hearty appetizer we easily could have shared one of them.  The grand total including tea and soda was just $56 for the two of us.

I found out after our visit that the award-winning (and oh so much fun) oyster shucker, Scotty, can be found behind the bar.  So, if you are a fan of Scotty, make sure and look for him when you go.  We didn’t try the raw oysters but I heard good things so I am sure that they are of high quality.

I recommend seafood lovers give it a try.  I didn’t try a burger or the wings but for those non-seafood lovers out there, I’d expect that they are also good. They shared a photo of their wings on Facebook and they look very tasty.

Half Baked Oyster Bar is at 2920 Thomas Drive near the Navy base.

The following is a guest post by Dale Vernor. Visit him on Twitter! Panama City Beach is a popular destination for tourists, especially for those...

END_OF_DOCUMENT_TOKEN_TO_BE_REPLACED

Five Free or Cheap Things to Do in Panama City Beach

END_OF_DOCUMENT_TOKEN_TO_BE_REPLACED

Staying Fit While On VacationWe are excited to present our first guest post, Best Beach Exercises, provided by Samantha Olivier. Samantha has a...