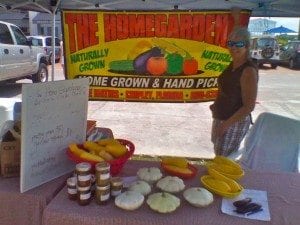 I have lived in this area for over two years now and one of the things I miss the most about the San Fransisco and North Bay area is the local farmer’s markets, where I would usually pick up my weekly produce.

At the start of spring I started to look around and found out about two markets that seemed like the type of thing I was missing.  One in Seaside and the other, St. Andrews. Yesterday, I tried the Seaside market.
First of all, I just want to say that I am in love with Seaside!  I can’t believe that I hadn’t been over there before this.  I’ve really spent most of my time just exploring Panama City Beach with the occasional cross the bridge excursion.
Seaside, along 30A in Walton county, is set up around a central square, or amphitheater as it is called, with charming restaurants and shops surrounding this center open grassy space just perfect for people watching.

The market was small, though I was told that was because it is still early and that once there is more fresh produce ready to sell, more vendors will come.  There were two vegetable vendors, with squash, eggplant, asparagus, peppers, cucumbers and tomatoes.  The tomatoes didn’t seem quite ready and a couple of other vendors assured me that in two to three weeks I will be able to get ripe, juicy red tomatoes at the market.  The only fruit I saw was watermelon and blueberries but soon, they said, there will be more.

In addition to fruits and vegetables, there were booths set up with herbed olive oils, fresh breads, local honey, raw milk and cheese products, fresh baked goods, homemade preserves, even farm fresh organic eggs.  A couple of booths for other items like handmade jewelry and soaps were also displaying their work to sell.

I plan to return next week and spend more time and will check out the market in St. Andrews next.

Seaside Farmer’s Market happens each Saturday from 9am to 1pm most months of the year.  It is approximately 30 minutes from Panama City Beach depending upon where you are staying.

30A Guide   Our guide for 30A offers ideas for fun things to do and good places to eat along 30A in South Walton, Florida!  More 30A/South...

END_OF_DOCUMENT_TOKEN_TO_BE_REPLACED

Thanks again to iTrip vacations for contributing this article about Grayton Beach on 30A. The South Walton-30A area is a strip of highway that runs...

END_OF_DOCUMENT_TOKEN_TO_BE_REPLACED

Staying Fit While On VacationWe are excited to present our first guest post, Best Beach Exercises, provided by Samantha Olivier. Samantha has a...